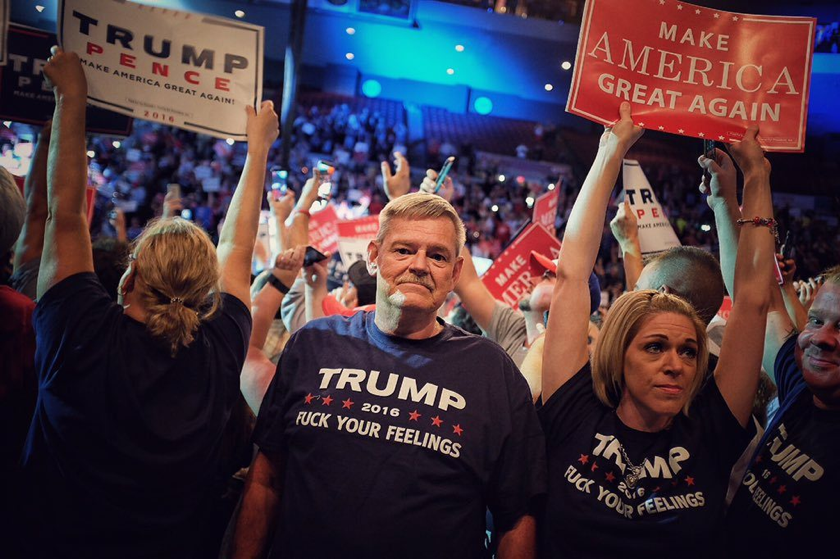 What does this photo tell you?

Roland Barthes would see the crowd, the signs being waved and the t-shirt logo as the “studium” of this photo; the physical, cultural and historical details of the photo that teach us something about the context of a frozen moment. What Barthes would call the “punctum” of this photo – the detail that compels your eye and skewers you – is the defiant and indifferent stare of an old white man.

My first reaction was that I need to jettison the rest of my lingering Socratism (the fanciful notion that if you marshal enough rational arguments you can bring anyone around to your vision of the truth). This old white guy is basking in belligerence; he is not beckoning anyone to civil discourse. I can see no political utility in trying persuade this man (and the portion of the electorate he represents) of anything. Instead, we must see this man and his ilk as the most visible symptoms of an underlying disorder.

I am listening for the politicians who speak directly to the root causes of this disorder; what Bernard Stiegler calls our culture’s “symbolic misery”. So far in this run-up to the 2020 elections, two candidates have impressed me. Elizabeth Warren when asked if she was a socialist replied, “I believe in markets…but capitalism without rules is theft”. The billionaire Sacklers get us hooked on oxy, hoover up as much money as they can from hapless victims and for the pittances they give back to museums are called “philanthropists”. Pillars of American society.
Peter Buttigieg said this:

I don’t think Mayor Buttigieg read my post “The Shallow Freedoms of Neo-Liberalism” but given his education I cannot help but believe that he is channeling Isaiah Berlin as he zeroes in on a primary feature of the neo-liberal pathology- the reduction of the concept of freedom to retail choice. We are free to buy anything we want at the grocery store but our children are not “free” to attend school without active shooter drills. If you are an African American teenager you are “free” to buy a hoodie but you are not free to run down the street in it. If you are a poor American, you are “free” to stay poor and so are your children. You are “free” to go to college and “free” to be indentured to a student loan thereafter.

I am listening for candidates who will tell us that things are backward; that we are all the “government” and our life values must supersede the transactional values of the marketplace. I want to hear that we can collectively decide what constitutes a just distribution of wealth; that we are free to create the social and economic conditions in which everyone can flourish.

Rapacity >>
<< There Is No Future Filled with Reparations