John Rawls thought that political society was a cooperative venture that we all enter into for mutual advantage. He posited that although we can imagine a society in which each individual has equal access to all resources, we are willing to accept some inequality of wealth distribution if it means that everybody is more prosperous. Hence, we accept capitalism. We accept without much reflection that “there will be winners and losers”. We subscribe to the notion that some wealth inequality – that which can be generated by the innovative or the entrepreneurial – is good at a macro level. The success of a Bill Gates floats a lot of boats. This is why the Republican’s mantra “the job creators” has so much resonance for many people. Previous posts here {“The Planet Klepton” & “Americans on Drugs”} have touched on the topic of wealth inequality.
But extreme wealth inequality is not a philosophical problem any longer, there are real life consequences for the haves and the have-nots.
The consequences for the have-nots:

-Children born to low-income parents are twice as likely to end up in special education classes and three times as likely to suffer mental health problems than those in the highest income group.
-Canadians with an income of $15,000 or less have three times the risk of developing diabetes than those who earn more than $80,000.
-More than one in five American children live below the federal poverty level, making them more likely to suffer from asthma and obesity and have poorer nutrition…(and have) less access to health care and lower vaccination rates.
-Children in chronically im­poverished families have lower cognitive and academic performance and more behavior problems than chil­dren who are not exposed to poverty.
-The poor are more likely to be incarcerated and the more people we incarcerate the more poverty we create. This effect is horrifically visible to African Americans.
-The Great American Vicious circle; born poor your chances of completing high school plummet. No diploma, no job. Black American males in their 30’s without a high school diploma are more likely to be in jail than to have a job.

What do the “haves” get out this skewed distribution of wealth? One doesn’t have to be a social scientist to figure what powers are conferred by virtue of great concentrations of wealth. Great wealth can control the media, flood the Intertoobz with disinformation and control what messages the peons will see and hear. Rupert Murdoch has used his wealth to construct an apparatus of propaganda that would put Soviet-era Tass to shame. Oil billionaire brothers can fund climate disinformation and lobby against environmental regulation.Those who inherit billions can afford to give millions to support politicians who oppose estate taxes.

Let us remind ourselves of the founding purpose of this country:

We the people of the United States, in order to form a more perfect union, establish justice, ensure domestic tranquility, provide for the common defense, promote the general welfare, and secure the blessings of liberty to ourselves and our posterity, do ordain and establish this Constitution for the United States of America.

More that 16 million U.S. children are growing up in poverty. Is this how we promote the general welfare? Five members of the Walton family are have more wealth than the bottom 42% of all Americans combined. Does this state of affairs reflect a “more perfect union? One in three African American males will go to prison in their lifetime. How can this be construed as justice? How are we securing the blessing of liberty for all of our fellow citizens by having the highest incarceration rate in the world?

One last question: how are we setting the stage today for future domestic tranquility? 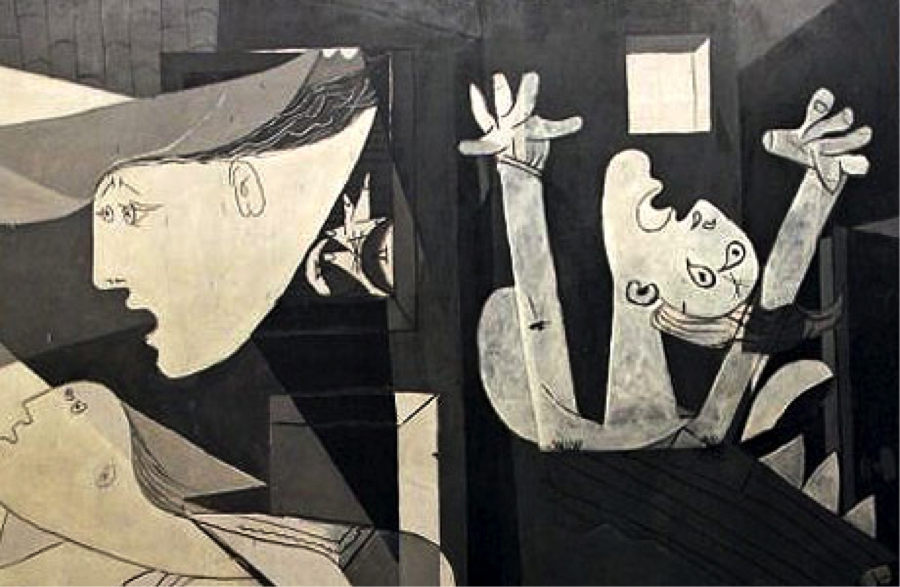 How can any of us live a moral life in this cruel world that we have fashioned for ourselves?

Is it moral to compartmentalize? to rationalize? to emotionally walk away from the horrors? I can walk by the homeless. I can put the sign-holding beggar at the intersection out of my mind. Iraq is long ways away; so is Israel and…aren’t there bad actors on each side? One out of 6 African American men in prison? Out of sight, out of mind. I am just trying to live my life. Sometimes I feel like holding up my own hands in the face of this onslaught of the wrong and crying “Stop already”.

Last evening my wife and I were on our way to eat dinner with friends. At 23rd and Union in Seattle we saw a solitary African American man holding up both hands with a sign in one hand that read “Hands up, don’t shoot”. A resonant plea to our own humanity “Stop, recognize me”.

A moving sight, a moral man acting in the world.

The Avatar of Reason (wherein I presume to chide Richard Dawkins) 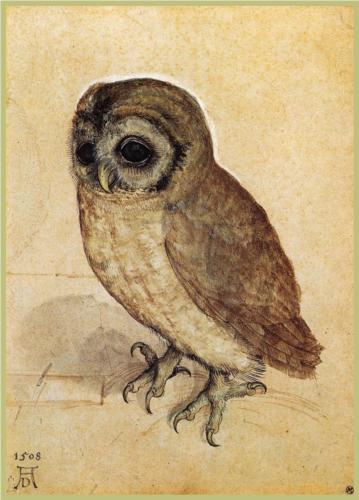 The Little Owl, A. Durer

ISIS is beheading Yezidis, Bokul Harum is kidnapping schoolgirls and white Americans are screaming at busloads of children. Most people would agree that these are all extreme behaviors which are, at the very least, immoral. These perpetrators are all zombies; they no longer view their victims as thinking, feeling moral entities. How did they get that way? Could I ever act that way? In earlier posts about climate change I wrote that what we think we “know” about climate change is inextricably bound up with the belief systems we hold profoundly dear. If the cognitive balance between knowing and believing is fluctuant, what does this suggest about the relationship between knowledge and morality?

What do we need to “know” (about ourselves and the world) in order to feel like we are moral entities? We need to know that morality is not character; it is not just how we happen to BE, it is how we think and decide to act. The fundamental moral question -“What should I do?“- makes no sense without our perception that we have a choice between one action and another. Morality then is an activity in which we engage. We think of ourselves as beings to whom moral concepts apply and and we see ourselves as accountable. We create ourselves as moral beings by making choices and acting on those choices and we interact with others as if they are also self directed agents. While I believe that life is a moral venture, for me, the really interesting questions begin when I ask myself, at what level DO I GET TO DECIDE?

Richard Dawkins recently issued some Tweets about rape and Palestine that elicited some strong reactions. His defense in the Huffington Post is simple. His tweets were not interpreted logically. He goes on to decry that

some of us may be erecting taboo zones, where emotion is king and where reason is not admitted; where reason, in some cases, is actively intimidated and dare not show its face. And I regret this. We get enough of that from the religious faithful.

According to Dawkins, a true moral philosopher with “a love of reason” will not fear to tread where reason leads. Dawkins makes a lovely logical point (“If I say A is worse than B, I am NOT endorsing B“) but his larger issue is the unwillingness of some people to endure some discomfort in the pursuit of reasoned discourse. Clearly, Dawkins sees reason as a counterpoise to emotion (and by extension a counterpoise to “the religious faithful”). Reason is the exalted tool that will lead us to “truth”; a notion right out of the Enlightenment. Noting that Dawkins’ immediate goals in this instance are polemical, it should be pointed out that the concept of reason has changed somewhat since the Enlightenment.

Twentieth century history and anthropology teach us that the contingent facts of our race, gender, class and ethnicity predetermine much of who we are. We are not radically free (e.g., I am a white, North American middle class male. I cannot become an Ibo tribeswoman). In a post appropriately titled, “How Politics Makes Us Stupid”, Ezra Klein cites research that indicates that “individuals subconsciously resist factual information that threatens their defining values.” Behavioral economics is teaching us that “the rational man” of neoclassical economics is a chimera (at best). Reasonable people make economic decisions on the basis of rules of thumb, stereotypes and cultural canards. Vagaries of affect are inextricably bound up in our assessments of risk and how we value time (profit now versus profit later). Empirical studies have repeatedly shown that we all have “implicit biases” that guide our judgements but of which we are not consciously aware. Attachment theory tells us (with increasing support from neuroscience) that the earliest dyadic exchanges between mother and infant through gaze and touch will shape the rest of our psychic and social lives in primal, unconscious ways. The neuroscientist Antonio Damasio argues that emotions are not opposed to reason. Emotions are not unruly beasts to be saddled by reason but are in fact the substrate of all cognition.

Another small indicator that reason (logic and critical thinking) is just the tip of the cognitive iceberg may be seen in how we attribute causation to human behavior. We all tend to attribute the genesis of human behavior either to “character” or as a response to the external world. The interesting fact is that we are far more likely to see other people’s behavior as caused by character whereas we will more likely view our own behavior as being prompted by the outside world. We impute causation to disposition because 1) we can’t necessarily see the environmental factors prompting some one else’s behaviors and 2) (more importantly) not one of us likes to caricature ourselves as a thin set of statistically likely responses.(I am not hopping about and yelling because I am needy and want attention, I have been stung by a bee.) We experience our own self as a “neutral” locus of awareness (simply, “who we are”) that reacts to our environment. So, when we face moral choices in our interactions with others are we really understanding their motivations?

Sullied as it is by all these “un-reasonable” forces, what role is left for reason in morality? Does any one of us ever make a rational decision about what we ought to do?

To be truly moral (and to be truly reasonable) requires more activity than simply deciding upon a choice. To be truly moral we need to hold a mirror to ourselves, to bring to awareness the patterns of behavior to which we are prone and look for the warp of our affect even when we are following a weft of reason. To be truly moral means recognizing that the other free agents with whom we interact are also beings whose ability to engage in reasoned discourse is as circumscribed as our own. Professor Dawkins is absolutely right in placing enormous importance on reasoned discourse because it is only through discourse with others that we occasionally can see ourselves from the outside. Dr. Dawkins might have more productive conversations with the “religious faithful” if he thought more about thinking itself.

Even if reason is an infected tool, it is the only scalpel we have available to us.